Rosalina and I rose to the sound of the local rooster and prepared for our first day leading a dance workshop with local youth at Teatro Icaron. I was excited to see the theater space, meet its director, and begin our volunteer work as Teatro Icaron was the recipient of last year’s Bahia In Motion holiday giving project. After a delicious breakfast of fresh papaya, mango, pineapple, eggs and jolting café we set out into the hot and humid day. We carefully opened the oversized heavy door of our tranquil casa particular (bed and breakfast), savoring our last breath of clean air before stepping into the narrow, diesel-fumed main street of Matanzas. Ahhh Cuba! A country full of contradictions, vitality and history at every turn.

Each step was slow and metered so as not to expend too much energy in the heat, allowing for a slow-motion view of the world around us. As we zig-zagged through the colorful streets, being careful not to step in garbage or iridescent green puddles left by 1950’s Chevrolets, women swept their front steps, store owners prepared a few scant items for display, and a huddle of friends recalled the memories of rum and the rhythms of rumba the evening before.

Once a mecca for artists, poets, musicians and actors in the 18th and 19th century, Matanzas was called the “Athens of Cuba” and holds one of Cuba’s most glorious neo-classical theaters, Teatro Sauto (now being carefully restored). Many claim Matanzas as the birthplace of the signature Cuban musical forms of danzon and rumba, in addition to Afro-Cuban Orisha music and dance traditions.

When we arrived at Teatro Icaron, the theater’s director Miriam Munoz was calmly waiting for us in the front lobby. Miriam is a renowned Cuban actor who founded the theater and now directs its programs for under-privileged youth. She rose from her chair to greet us and extended her hand. With this simple gesture, her presence struck me. I sensed I was in the company of a noble warrior.

As we entered the theater, still under construction, I noted a certain charm in its gray, cement-spotted walls, hanging electrical cords and tiered floor leading down into the belly of the stage. We explored rooms full of costumes, set designs and photos. Miriam spoke about the history of the theater and her work with youth, productions of the past and plans for the future. She and her daughter Lucre have worked tirelessly for fifteen years to provide a chance for youth to prepare for higher education in the arts in Havana. Many of the youth in their programs have histories of abuse and violence and lack basic needs for proper nutrition and sanitation. Building and finishing the theater has been a slow process due to lack of funding and support and the bureaucratic red tape involved in completing a project in a country still plagued by poverty and oppression.

We met our first group of students. Their curious, sparking eyes and broad smiles drew me in. Their previous training at the theater showed discipline and an eagerness to learn. Some seemed shy at first, unsure of how to navigate our direction and my Spanish accent. As the Brazilian music of Samba Reggae played, their bodies melted into the rhythm, giving a buoyant quality to our solid concrete dance floor. Movements of Capoeira were explored, challenging the students to find their strength inside and out. We delighted in pop songs from the United States and Brazil, that were new to their ears. One day a student proudly showed up in a Brazil tank top, inspired by the work done the day before.

Under the hum of fluorescent light bulbs, surrounded by dingy green walls and dusty air we laughed, sweated, and celebrated. Despite our differences in color, race, and native language, we connected through our common love of dance and the arts.

Our work culminated in a mini-performance combining Brazilian dance, Capoeira and elements of acting. As the students explored each part of their performance, we caught a glimpse of their personalities, their dreams, their sadness and struggles. We ended our time with them in a ritual from Brazil. Each student was given a ribbon from the sacred church of Bom Fim in Salvador, Bahia. Revered by those in both the Catholic and Condomble traditions, this church is known throughout the entire country of Brazil and around the world as a place of peace where miracles occur. Those visiting the church are often given a ribbon as a remembrance of this sacred place. The ribbon is secured around the wrist with three knots. A wish is humbly asked with each knot.

The students took time to design their three wishes. They focused intently, closing their eyes as each knot was tied. I spoke of the peace and “Axe” (vital life force) the culture of Bahia brought to them through the symbols of the ribbons. A calm strength seemed to settle over each student. 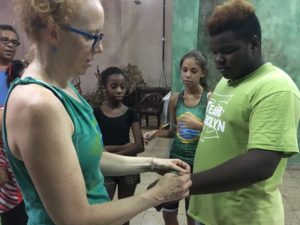 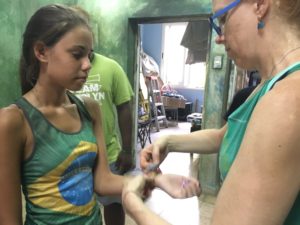 At the closing of our time at Teatro Icaron, we ended with an embrace and smiles that filled the theater, turning it from its current state to a brilliant space, adorning it with the hopes and dreams of the students, and grounded in the integrity and perseverance of Miriam and Lucre.

Special thanks to Rod Ambala and Ariana Corrado for connecting us with Teatro Icaron and the Kayla Project. Rosalina Macisco Mattheis is a dear childhood friend who runs the non-profit Santa Barbara Dance Institute in Santa Barbara, CA. We traveled to Cuba together in August of this year, exploring Cuba’s dance and music traditions to enhance and enrich our current work and celebrate our life-long love of dance.